You all must know that one of my hobbies is entering cooking and recipe contests. I love to cook and contests encourage me to get really creative in the kitchen by stretching my mind to come up with new ideas. Plus, there's the added bonus of getting a chance to win a prize!

Food Network Canada has a monthly contest where they ask everyone to cook a recipe of their choosing, take a photo, and send the photo in with a short paragraph about what you thought of the dish.

This was my first time entering the contest and I won! I don't know what my prize is yet, but the day that it will come in the mail will be very exciting!

You can check out a shot of my winning photo below or visit the Cooking Club Challenge webpage to see my photo and the recipe, Anthony Sedlak's Tangy Short Ribs with Coleslaw and Twice Baked Potatoes.

I added some fresh apple cut into matchsticks, a touch of sesame oil to my coleslaw, and also folded a touch of blue cheese into my potatoes, but otherwise left everything as the recipe suggested. 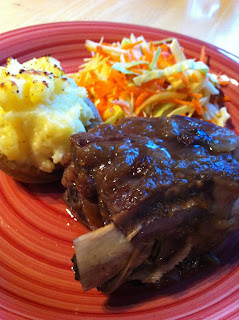 The only thing I don't agree with in the recipe is calling the potatoes Twice Baked Potatoes. At my house they're called Party Stuffed Potatoes, but that's a story for another day...
Posted by Sarah Reynolds at 07:40