Lately I've had a hankering for blue cheese and I've been putting it in everything. I've put it on a beet salad, I've folded it into Twice Baked Potatoes, and now I'm putting it into a beautiful, fresh orange salad.

I don't know what it is about blue cheese, but I think that it adds another dimension of flavour to almost any food. It pairs well with meat, potatoes, fruit, and veggies. I think the only thing it wouldn't taste good with is chocolate.

Read on for my recipe for Blue Cheese and Orange Salad. 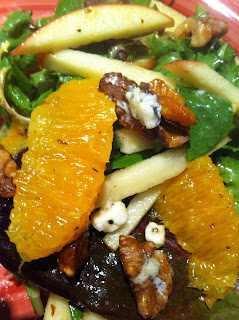 1. Preheat oven to 350 degrees. Place walnuts in a small dish and bake until toasted, about 5 minutes.

2. Cut orange into segments, or supreme the orange.
- Cut both ends off the orange, enough so you can see a little of the fruit below.
- Then take all the peel and white pith off with a knife, carefully so you don't remove too much of the fruit.
- You should now see the white lined edges of the membrane running from the top to bottom of the orange. Now it's time to remove the fruit from the membrane. Slice into the orange, as close to the membrane as possible, and cut until you get to the middle of the fruit. Repeat the process for the other side of the segment to cut out a perfect wedge.
- Repeat the process to cut out each segment of orange.

3. Now make your salad dressing. Squeeze the leftover part of the orange with the membrane attached into a small bowl. If there's any fruit left on the peel, squeeze this juice in too. Mix in the oil, marmalade, and mustard. Taste and add a little extra orange juice if needed. Set aside.

I served this light, end of summer salad with chicken, but I think I try beef next because blue cheese tastes so great with beef!
Posted by Sarah Reynolds at 06:46