I had more than one chia pet growing up and when I first heard that people were eating chia seeds, I just couldn't imagine why. Chia pets were a fun things to play with but I was always told to not play with my food, so I was going to think about eating chia seeds.

Now I wish I started eating chia sooner because I love the stuff. I love chia so much that I am dedicating this whole week on Delish in a Dish to chia seeds. I've got a few fun recipes planned, but today is all about my Chia Salad Dressing.

If my Chia Salad Dressing recipe is reminiscent of the popular creamy poppy seeds dressings, it's because that's where the idea for this recipe came from. I love poppy seed dressings but know that there are way more health benefits in chia seeds so I decided to swap the seeds and I loved the end product.

Ready for my recipe? Read on to make it yourself! 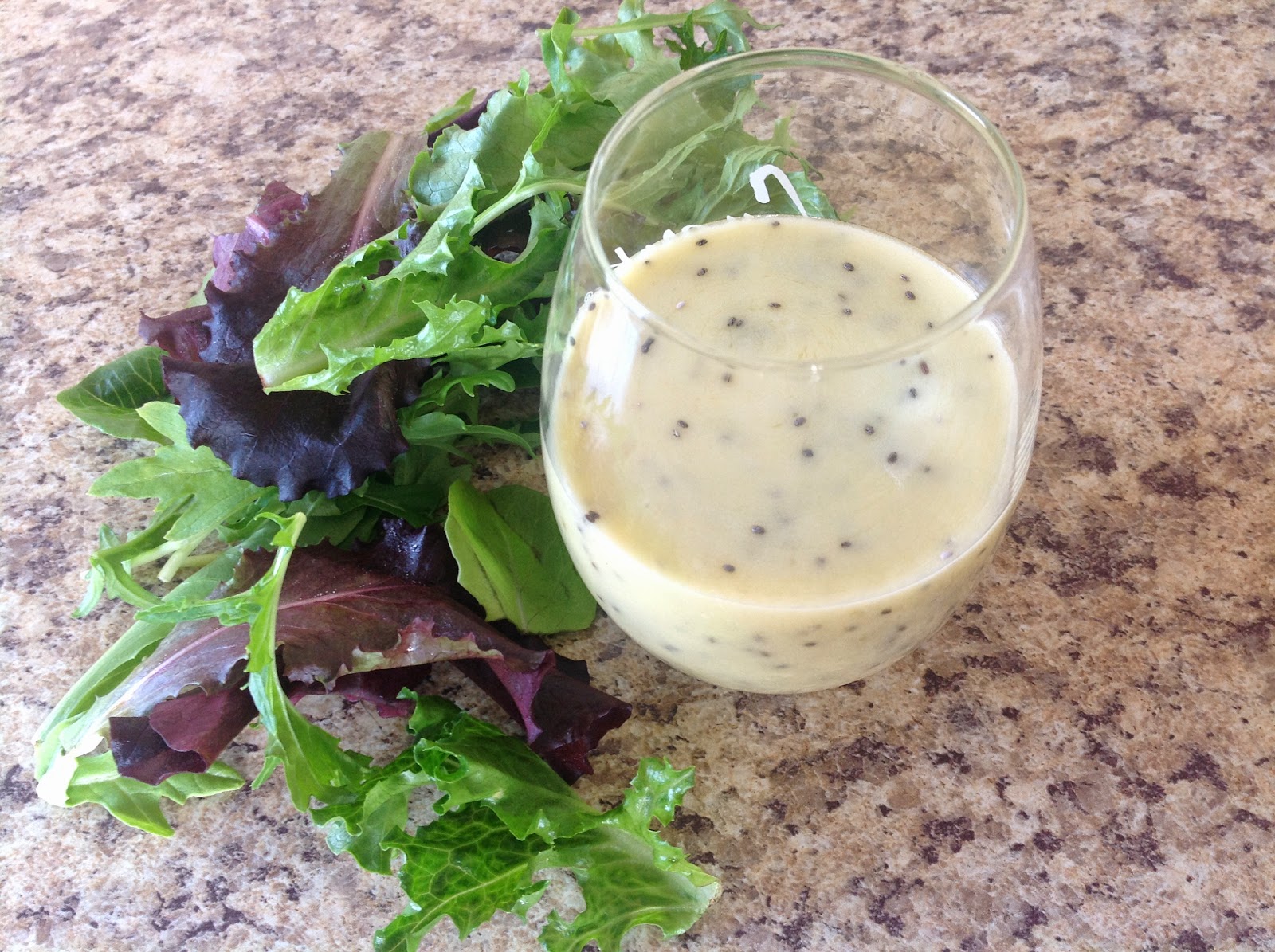 Read more »
Posted by Sarah Reynolds at 06:50 No comments:

The words "vanilla" and "butter" are two of my favourite words of all time, especially when I know that I'm going to be eating them in the near future. It's interesting to me that neither of those two ingredients are tasty if served to you on a spoon on their own, but both taste like magic when put into a dessert.

Last weekend I was baking a pie for Easter dessert and realized, after I returned from the grocery store, that I didn't have enough shortening to make my pastry. I had always used all vegetable shortening in my pastry so was immediately disappointed that I'd have to go back to the store. Then I remembered that my mom uses part shortening and part butter in her pastry and her pies always taste much better than mine. I tried a new recipe of part shortening and part butter pastry, and I'll never be going back to my old ways.

The pastry paired perfectly with Chatelaine's Vanilla Rhubarb Pie. I changed up the presentation and filling a little, but the basic idea is the same. 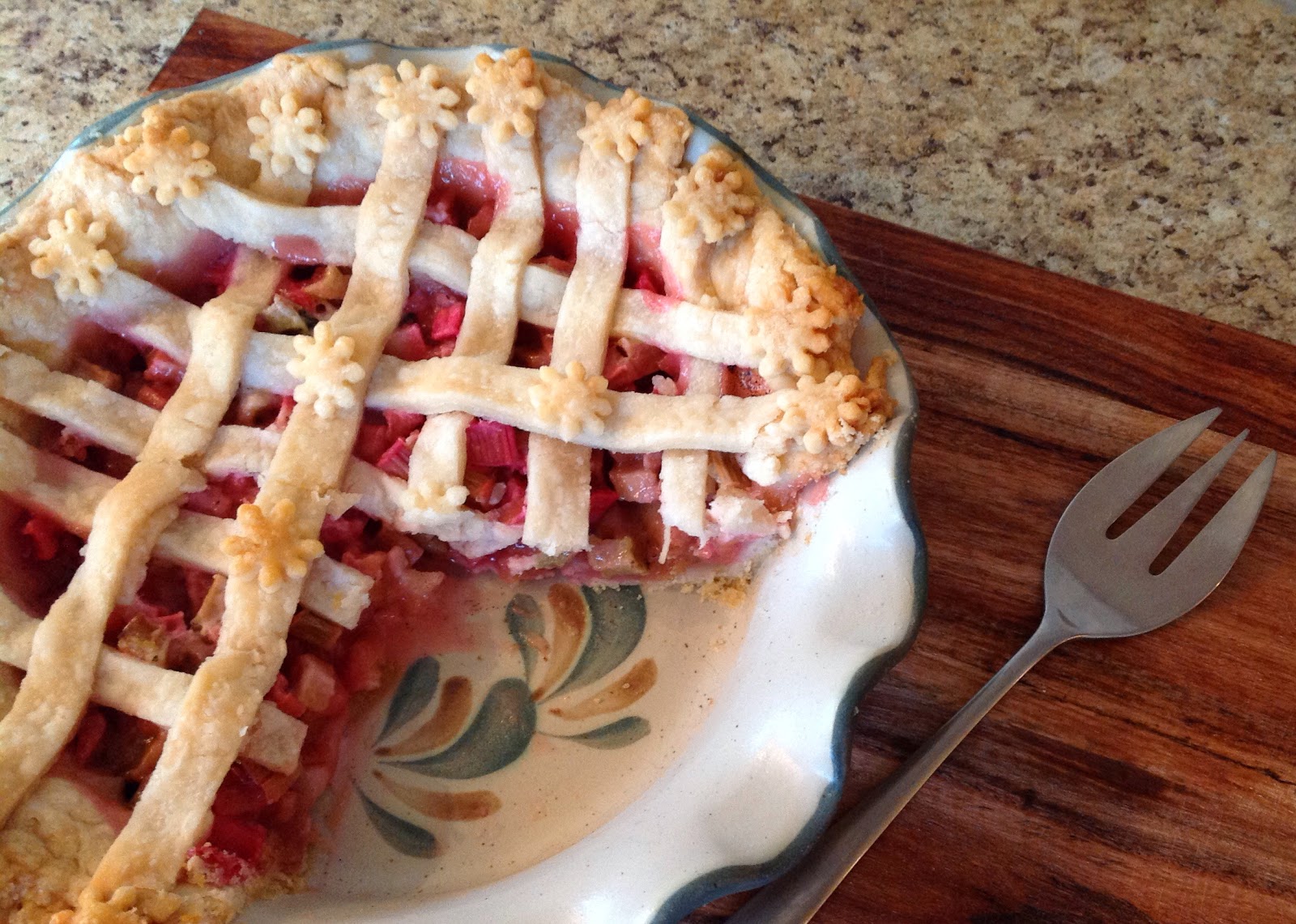 Read more »
Posted by Sarah Reynolds at 07:30 No comments:

Do you ever make NewYear's resolutions and wonder why you ever thought you could keep them going strong throughout the year? I think that around April every single year.

In January, I decided to try one new food per month for all of 2014. I'm still keeping my promise, in fact this month I actually tried two new foods, but it's much harder than I expected because there are only so many foods in the world to try!

In January I finally tried chia seeds and made a yummy chia seed pudding. In February I tried something I had never heard of, amaranth, and made a note worthy amaranth porridge with strawberries. And in March I tried raw cashews and made a truly delicious pasta dish with a vegan raw cashew sauce.

This month I was walking around the Bulk Barn, because that's where I've been finding all my new foods to try so far, and was worried that I might run before December. Then I decided to throw caution to the wind and made a yummy salad topper using two new foods for April. I realized that if I run out of new foods to try at the Bulk Barn, I can just head over to China Town or my Farmer's Market, it might get a little harder in December but if I keep trying I can fulfill this set of resolutions. 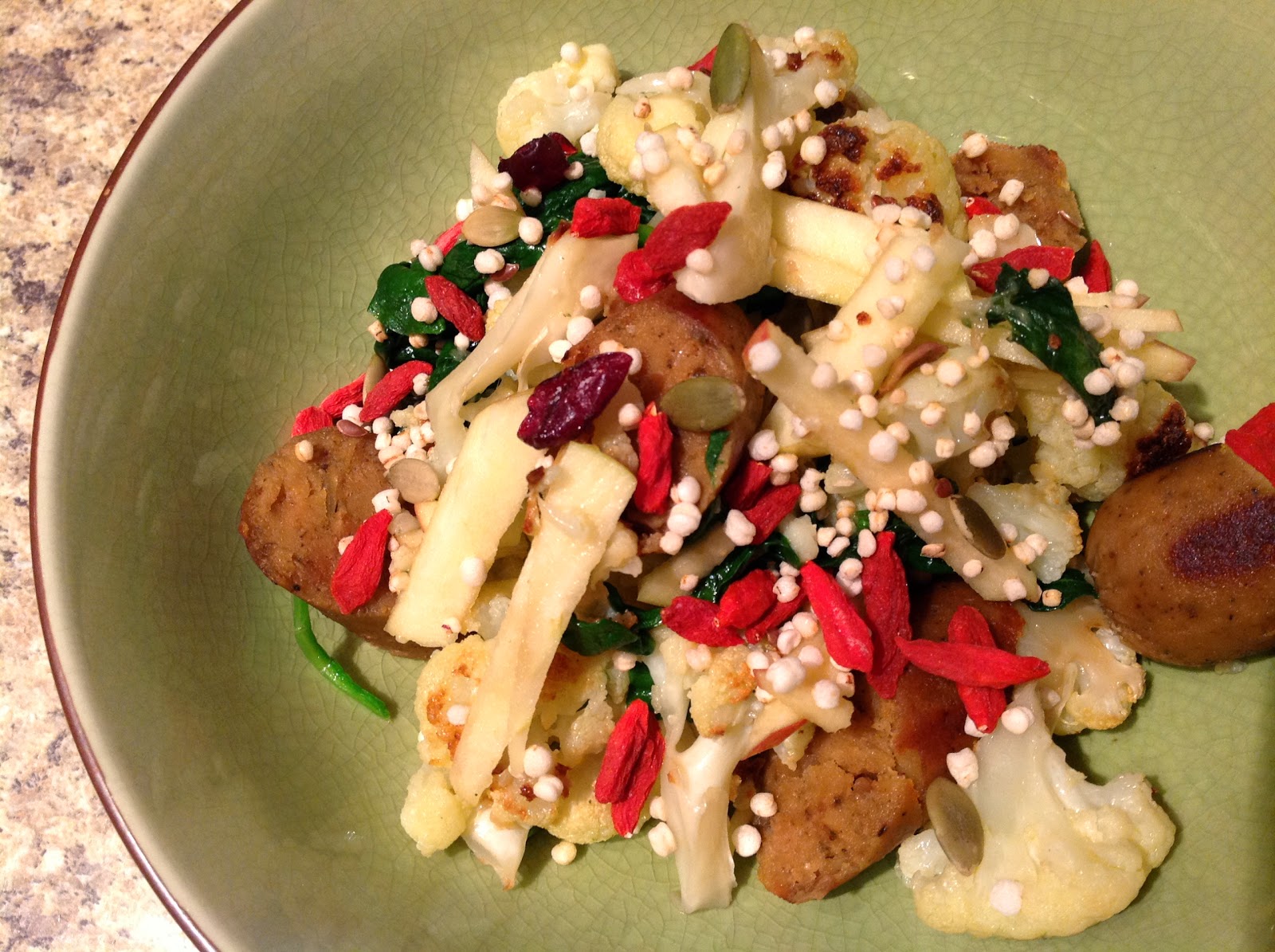 Read more »
Posted by Sarah Reynolds at 08:07 No comments:

This month Dawn from Spatulas on Parade challenged us to use Peeps and lemon to make something delicious in the Crazy Ingredient Challenge. I love lemon and use it in almost everything, but I had never even tried a Peep before this challenge.

Since I knew that Peeps were sugar dusted marshmallows, I knew I would be making a dessert. I couldn't even fathom the thought of trying to stuff those little guys into a dinner. And what do I think of when making a marshmallow dessert, rice crispie squares!

I decided to "fancy up" my idea a little and used puffed quinoa in place of rice crispies and I added a few additional treats in place of Easter sprinkles too. I think this recipe is worth keeping, crazy ingredients or not! 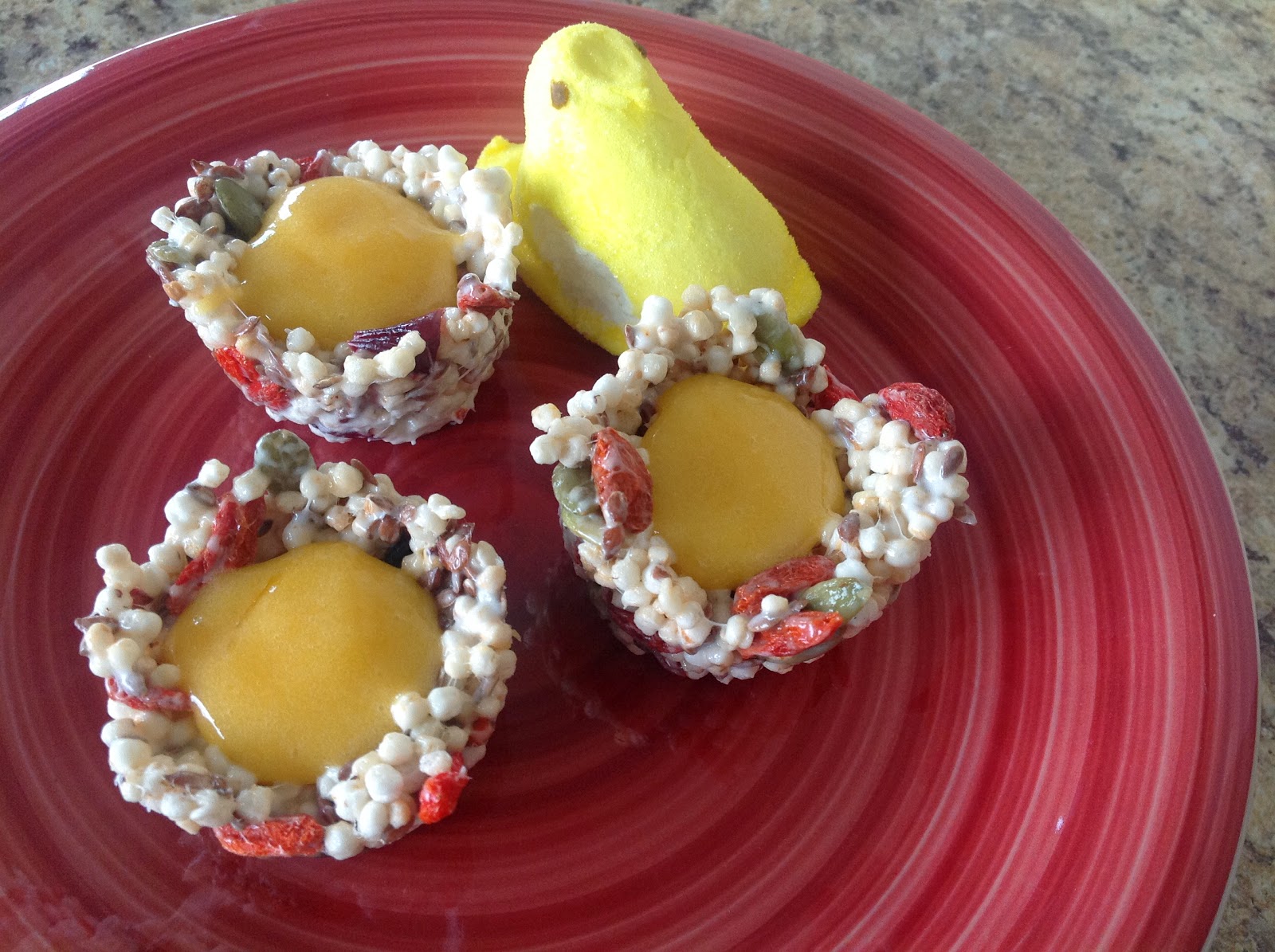 Who doesn't love cookies? To me cookies symbolize a holiday because I always have some delicious little buttery morsels at Christmas, Easter, and other celebrations. While I might make a batch of chocolate chip cookies now and then throughout the year, I tend to choose to bake an easy cake rather than individual little cookies more often.

But considering how much I love cookies, I think that should change. And I think you might tend to agree with me when you see how perfect these Linzer Cookies came out. They're so much easier than you would ever guess! 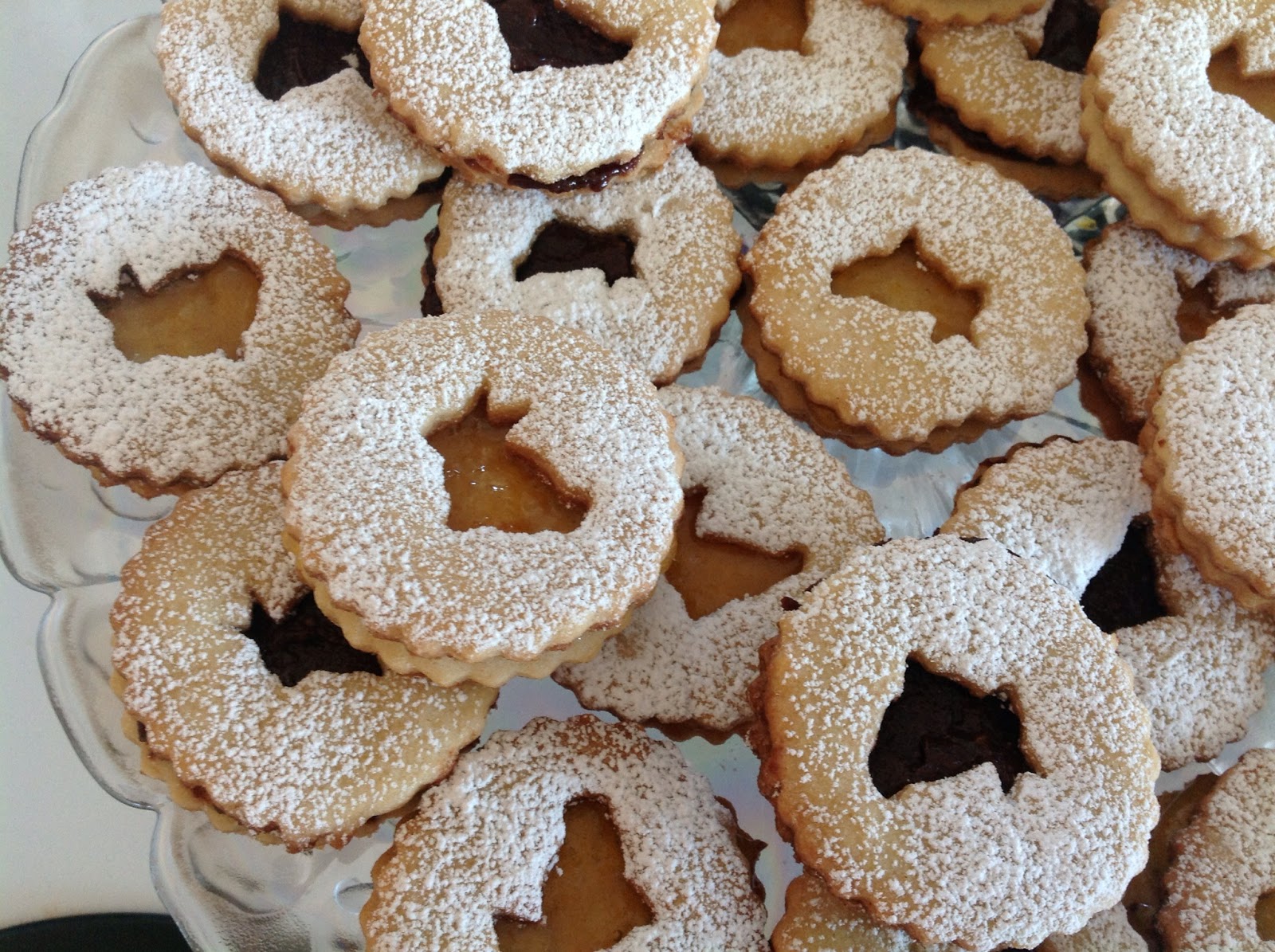 The Spice is Right

I love eating Indian food, but I seem to shy away from making it often because the flavours are so big and I just don't give my dishes as much punch as the restaurants do. Today, all that changes. Today, I vow to add "the punch".

To me "the punch" is spice. I don't mean hot peppers and that mouth burning feeling. I mean cumin, turmeric, and coriander. Indian food just isn't complete with enough spicy flavour to knock your socks off and today's dish has that spicy flavour. I adapted a great recipe from Vegan Richa and pumped up the flavours a bit to get exactly what I was looking for.

I think the spice is right in these Aloo Gobi Wraps, do you? 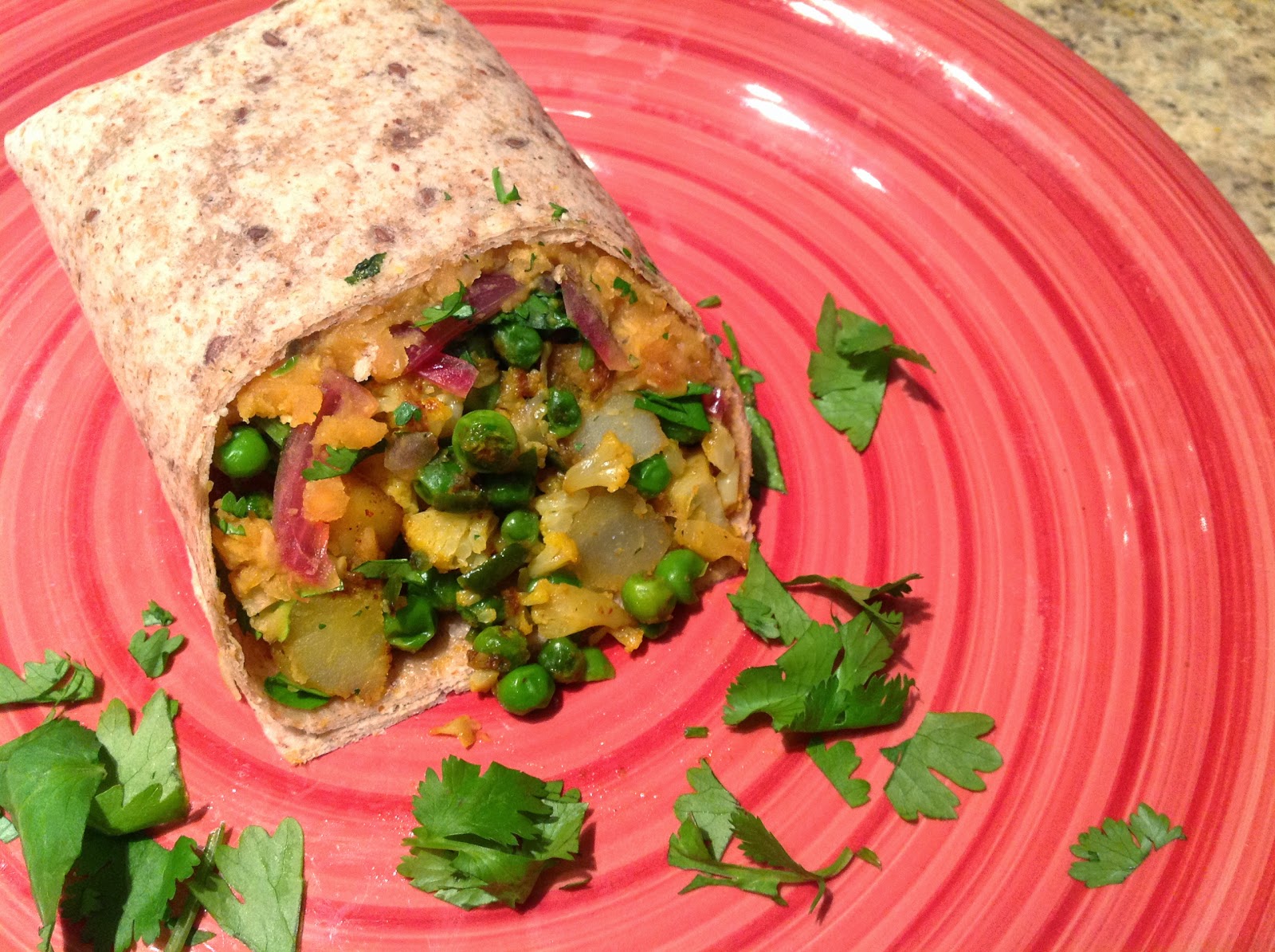 Read more »
Posted by Sarah Reynolds at 07:49 No comments:

Easter is one of most "egg"-citing times of the year and a time I "carrot" very much about. I love spending time figuring out what will "turnip" on my table for Easter dinner. And I am always the first one awake calling out to everyone to "lettuce" see what the bunny left for us.

This year I think I've found the perfect quick treat for my Easter dessert. It's almost as much fun as my puns and takes mere minutes to make, especially if you choose to skip the step of making your own edible dirt and substitute a cup or so of Chocolate Cheerios pulsed in a food processor.

I can't wait to dig into a bowl of this "Dirty" Chocolate Pudding with Chocolate Covered "Carrot" Strawberries so I know I'll need to make another batch for Easter. Chocolate anything doesn't even last a day in my house! 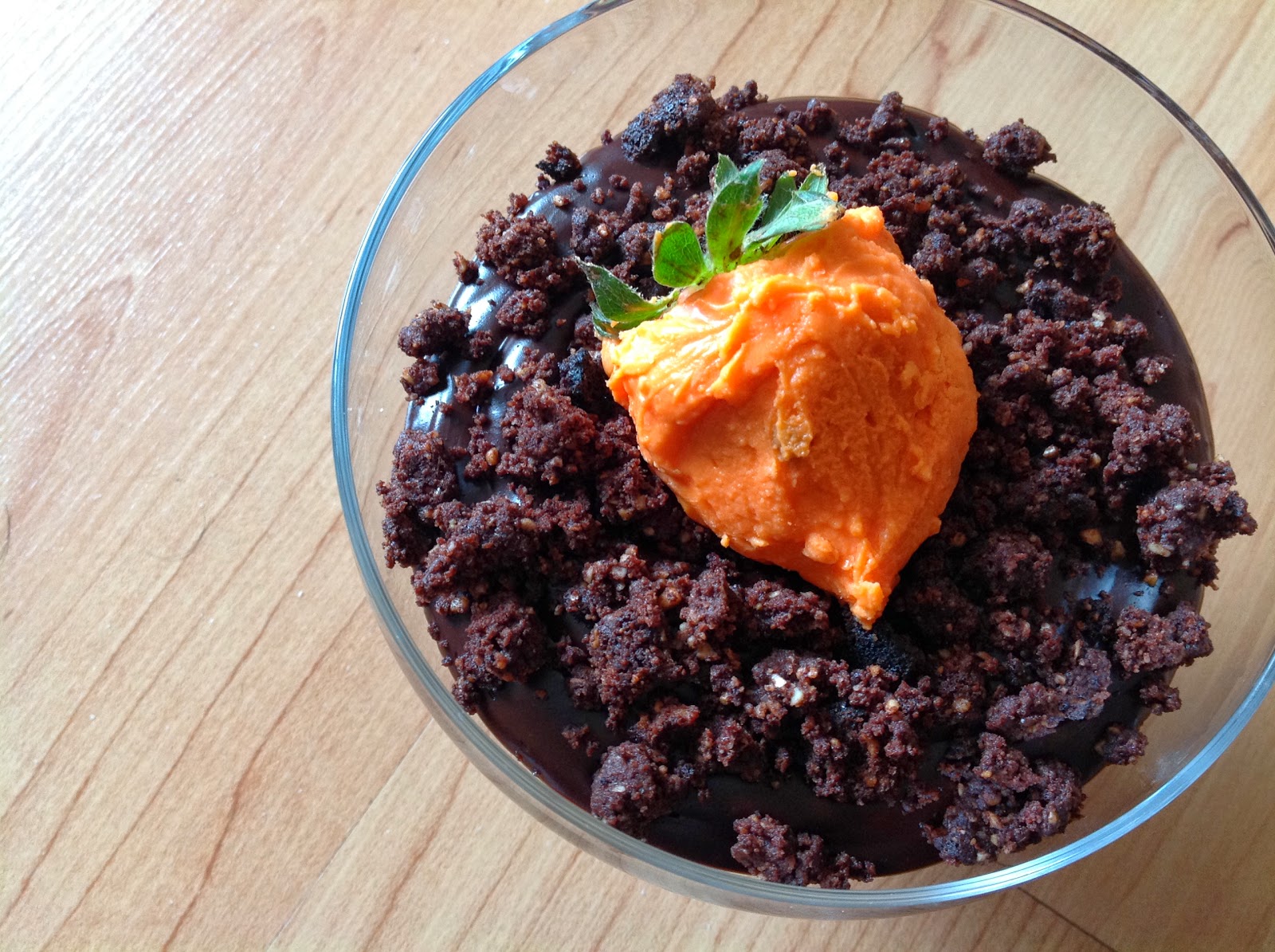 Read more »
Posted by Sarah Reynolds at 07:00 No comments:

I love baking up a storm for Easter but usually choose a carrot cake because it's seems fitting to serve carrots on a day filled with bunny love. This year I wanted to do something different and decided to make something cute for Easter that resembles a carrot cake, but tastes more like what the bunny might hide instead of what he want to nibble on after hiding all of the Easter eggs.

I headed off to my local candy store, came back with a few bags full of fun, and got really excited about my idea. These Chocolate Carrot Cupcakes are inspired by a photo I saw on Pinterest, but I made them my own by using decorations that were easier to find and a tried and true chocolate cake recipe from my recipe box! 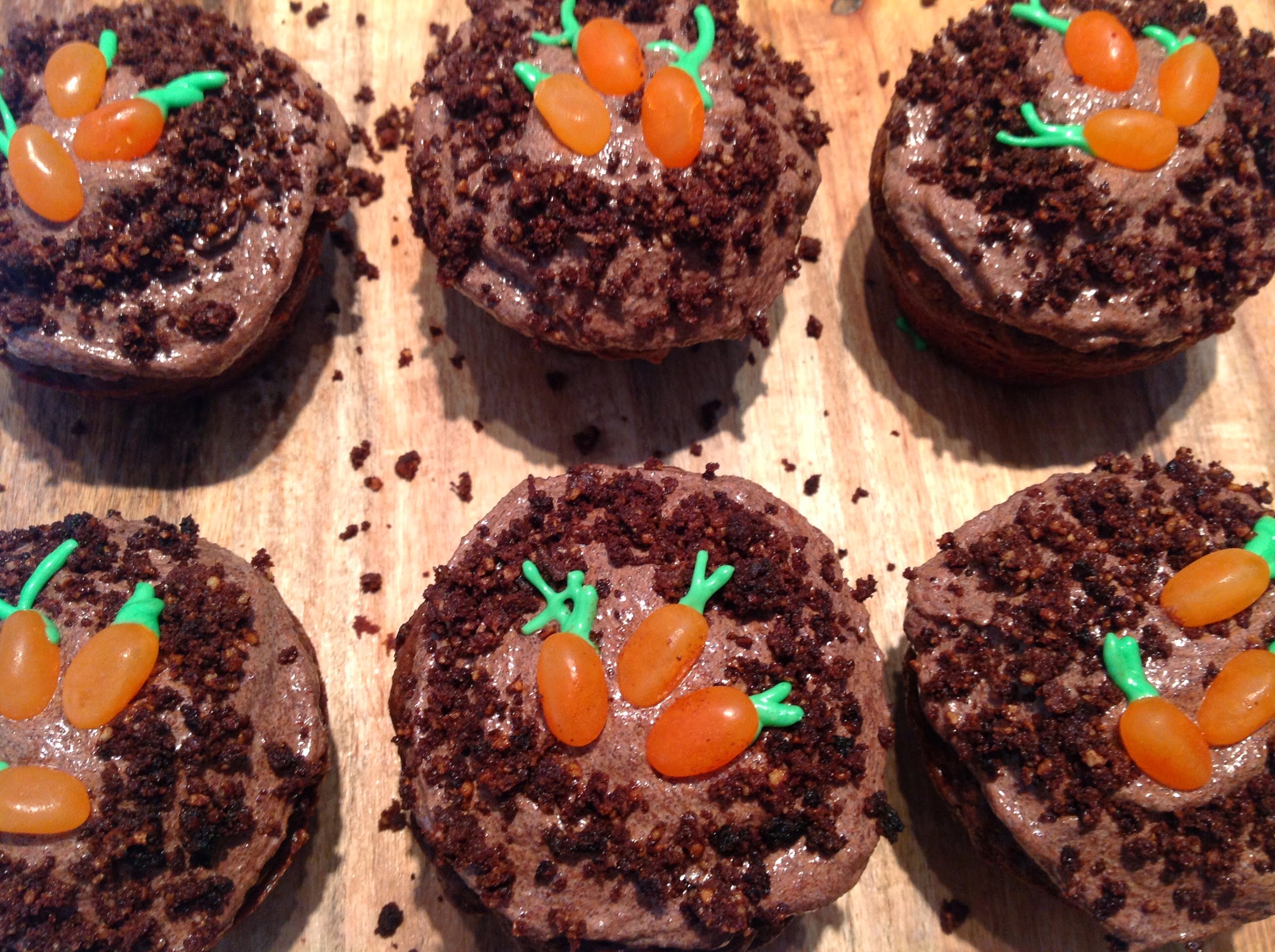 Read more »
Posted by Sarah Reynolds at 07:29 No comments:

I love going to Farmer's Markets and seeing what amazing vegetables could be featured on my plate in the summer, but right now Farmer's Markets are filled with mostly cheese, eggs, preserves, and baked goods. While I am a little less excited about baked goods and preserves because I love to make my own, choosing a special piece of local artisan cheese is worth the trip to a Farmer's Market in a colder weather.

This month's Canadian Food Experience Project challenge is to write about a Canadian farmer or producer and I can't think of any local producer better that Salt Spring Island Cheese Company. They make handmade goat and sheep's cheeses and each bite is worth every calorie. Their chèvre is particularly delicious, but I love putting out a cheese board filled with a few of their cheeses so I can sample a taste of everything.

I love to enjoy a bite of Salt Spring Island Cheese with nothing more than a cracker, but I think even just a few small pieces enhance a dish and makes it even more special. Why not try some with my Carrot Gnocchi recipe? It would make a great Easter treat this year! 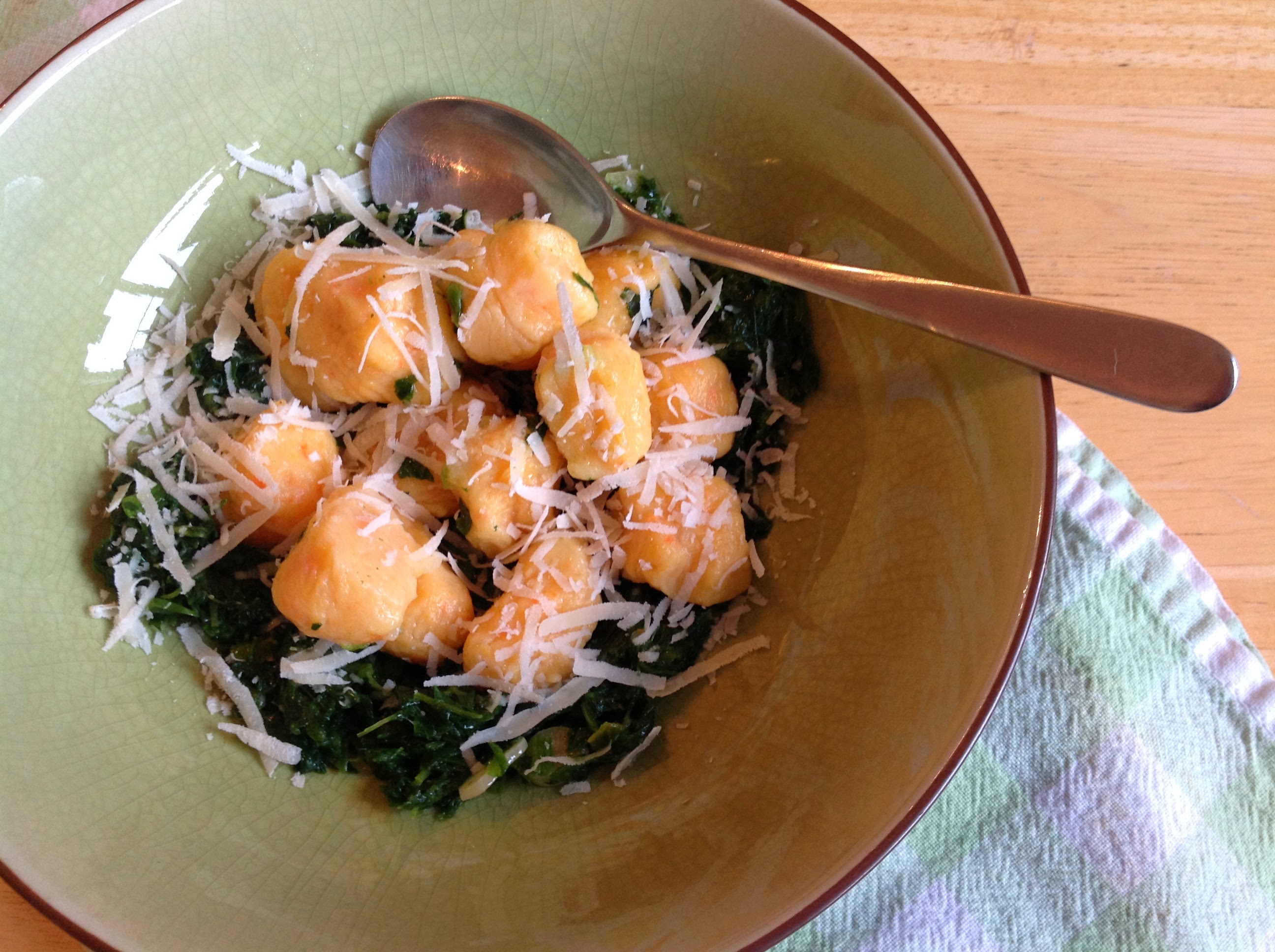 Read more »
Posted by Sarah Reynolds at 06:29 No comments:

If it wasn't for Luke, I think that I would completely eliminate fish from my diet and become a true vegetarian. But since he loves fish so much, I have merely cut back on how much fish we eat. We try to eat sustainable and local fish and that's easier than you might think, especially because we live on Vancouver Island.

Since today is his birthday, I've been making a lot of special fish meals to try and figure out his perfect birthday dinner. Because he has been talking about spending the day out on a boat, I needed a recipe that would quick to make and still special and delicious.

I think I came up with the perfect dish, a Smoked Tuna Pasta with Preserved Lemon and Mint. 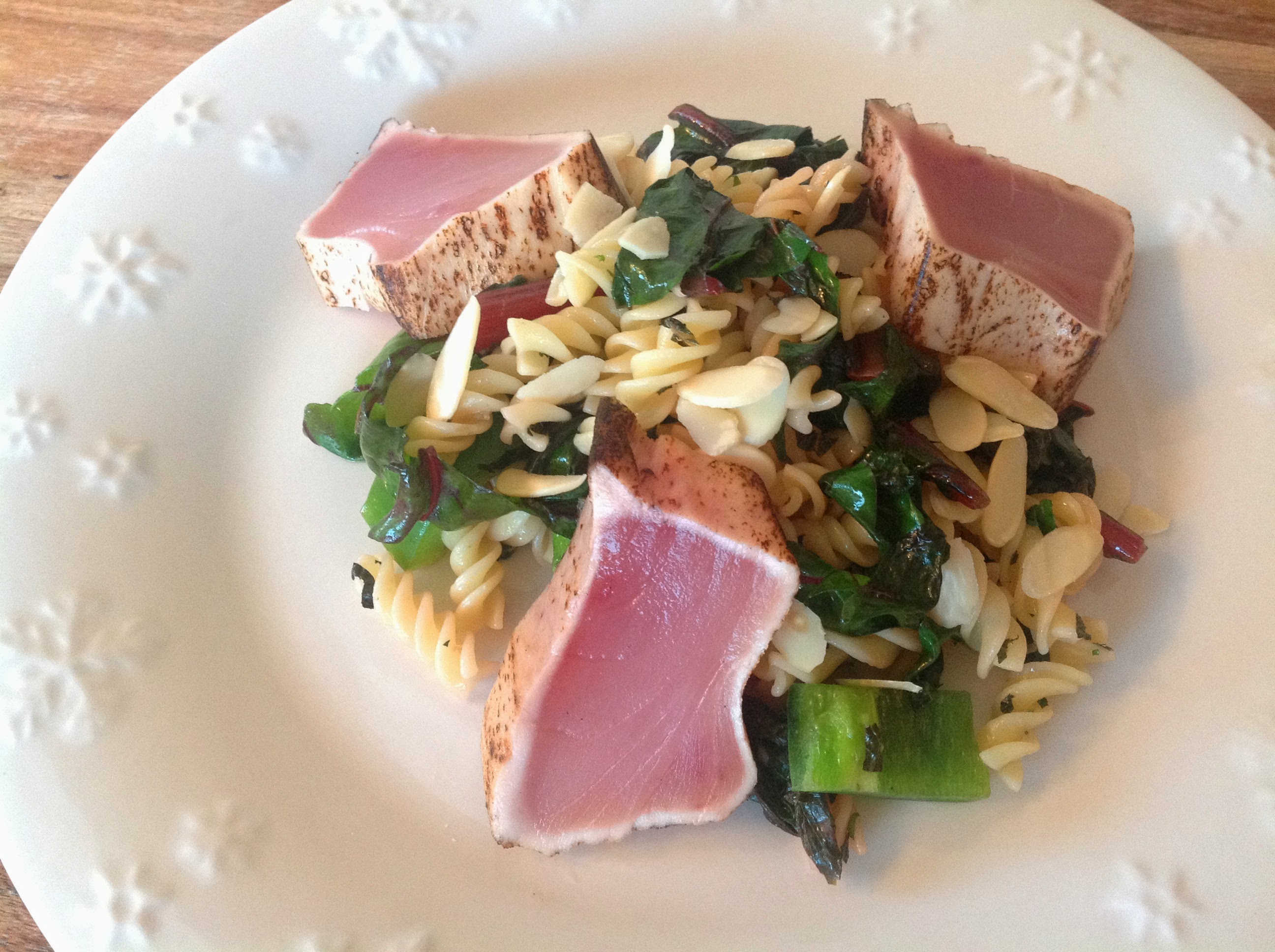 Read more »
Posted by Sarah Reynolds at 06:45 No comments:

Dulce de Leche Apple Cake. How have these words never left my lips before?

I'm not ashamed to admit that those words actually only left my lips because of Duncan Hines Apple Caramel Decadent Cake Mix, but I'm happy to say that my homemade version was much better than the surprisingly delicious boxed version.

That's right. Today's recipe is homemade version of a Duncan Hines mix. It's full of apples, almost as many as a pie in fact. It's full of dulce de leche, almost too full if that could be possible. And it's a cake that I am proud to serve for breakfast or dessert. Or for a midnight snack. Or lunch. Or pretty much whenever.

Read on for my Dulce de Leche Apple Cake recipe! 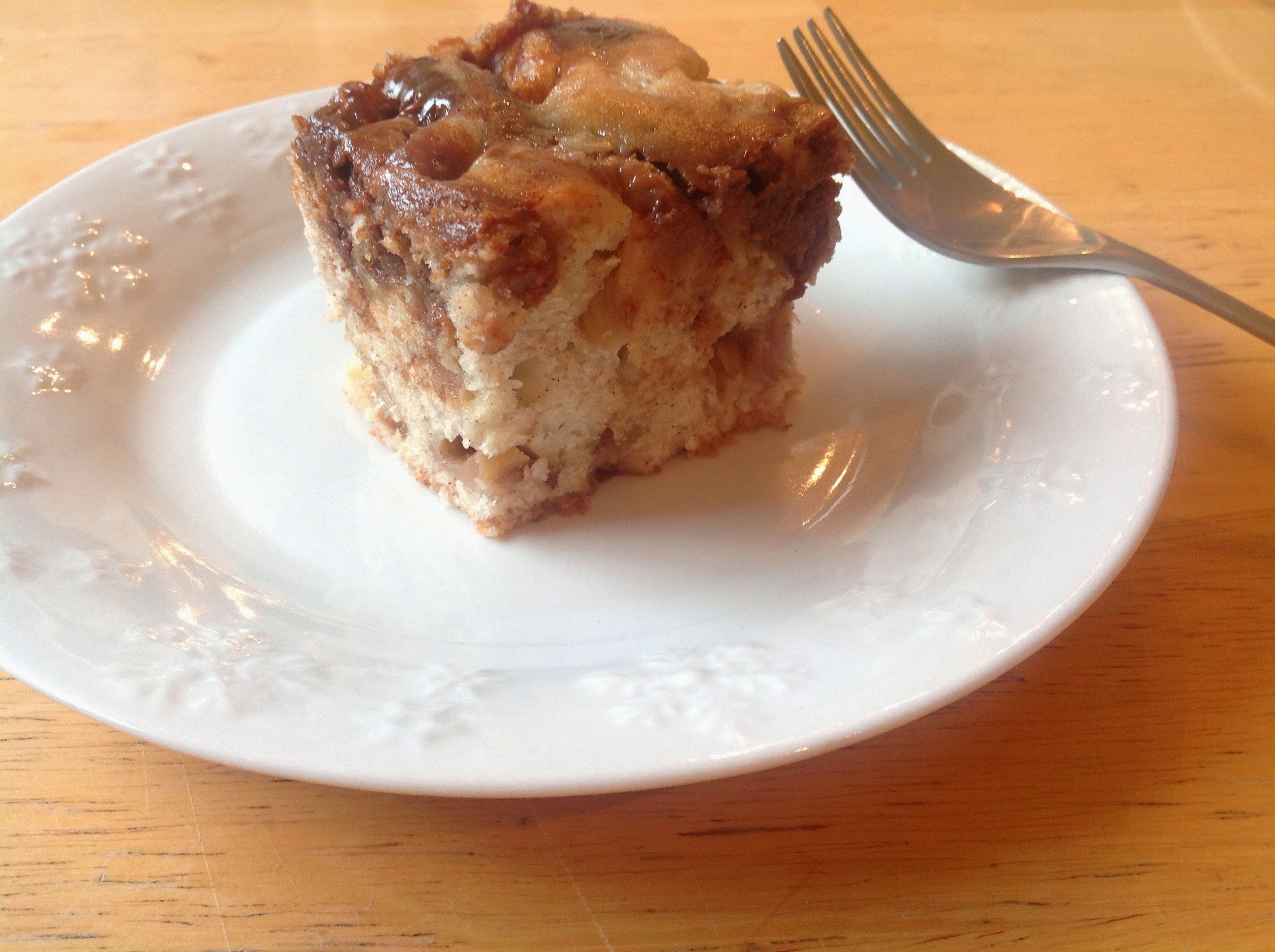