Call to the Bar

I love oatmeal in the morning, especially when it's paired with fruit. So when I saw that this recipe had both fruit and oatmeal in it, I got really excited. I had found my next breakfast!

At first I meant that as a joke, but after a bite, I caved. These Oatmeal Rhubarb Bars make take a while to bake but every second is worth it because they taste that good.

After one bite I felt qualified to argue my opinion of eating them for breakfast. But, funny enough, no one argued with me. Everyone was happy to enjoy one along with their morning coffee! 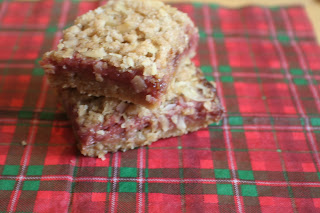 1. Preheat your oven to 350 degrees and then start with your filling. Add the rhubarb, 3/4 cup sugar, orange zest and juice, and flour to a medium pot on the stove and bring the mixture to a boil. Reduce the heat, stir occasionally, and wait for the rhubarb mixture to turn jammy, about 20 minutes.

2. Next whisk together oats, flour, 1/2 cup sugar, brown sugar, cinnamon, and salt. Crumble in butter until the dough is all combined.

3. Press 2/3 of the dough into the bottom of a 9-inch spring form or cake pan and bake for about 20 minutes or until golden.

4. Let the crust cool slightly and then spread the jammy rhubarb mixture over the golden crust.

5. Toss the remaining 1/3 of the dough with the almonds and sprinkle the dough overtop of the rhubarb in an even layer. Bake for about 40 minutes or until top crust is golden.

6. Let cool, cut into bars, and enjoy (for dessert or breakfast!)

This recipe is from the May 2012 issue of Canadian Living and I didn't change anything in it! It was that yummy!
Posted by Sarah Reynolds at 07:08