This summer I passionately and consistently entered Weston's Grill Up Summer contest. I didn't come up as a $10,000 winner but I did get chosen as a second place winner twice!

Before I start exciting you, let me tell you flat out that my prize had no monetary value. And that part is a little disappointing. But I am featured in a cookbook and I am pretty excited about that.

The first time was chosen as a second place winner, I turned down the prize. I was definitively honoured to be chosen as a winner, but I was told that a person could only win one prize and I wanted to go for gold. I wanted to win that $10,000 prize and that means that my Cherry Cola Pulled Pork sandwich isn't going to be featured in Weston's Grill Up Summer cookbook. But you can still read all about it on my blog.

Do you want to know what recipe of mine is being featured in the cookbook? Wait no longer, check it out online here or just read on for my yummy recipe! 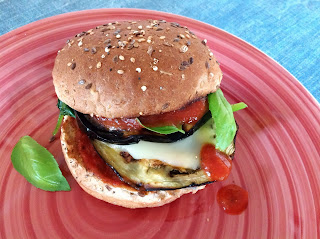 2. Pack spinach and garlic in a foil packet with a few teaspoons of water. Toss eggplant with oil and salt.

3. Place spinach foil packet and eggplant slices on the BBQ. Cook eggplant on the bottom level of the grill for about 1 minute on each side or until softened and grill marks appear. Cook spinach packet until spinach is wilted, about 2 minutes.

4. When spinach is wilted, remove the packet from the grill. You will have to gently open the packet to check if the spinach is done. When eggplant is softened and grill marks appear, move each piece to the top level of the grill and put a slice of cheese on each to melt. Toast the buns on the BBQ now too.

5. When the cheese is melted and the buns are toasted, remove from the grill, and layer up your sandwiches. Spread a little tomato sauce on both the top and bottom rolls. Scoop a little spinach on the bottom bun, followed by about three pieces of cheesy eggplant. Top with a few leaves of basil and sandwich everything together.