Awhile back I showed you one of my favourite dishes, Crispy Spiced Chick Peas, and you made them one of my most viewed posts! Today I was craving some of those snackable treats and couldn't find a can of chick peas in my pantry. But I did have some frozen edamame and I made something equally delicious with them.

It was a pretty simple switch from chick peas to edamame, because they're both in the legume family. But I decided that the spices I use with my Crispy Spiced Chick Peas wouldn't be as delicious on today's dish. So I got out my favourite Parmesan cheese and made something awesome. Read on for my simple and yummy recipe! 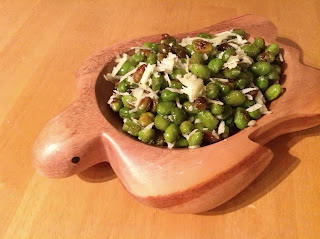 1. Preheat oven to 400 degrees and line a baking dish with parchment.

2. Toss frozen edamame with oil, salt, and pepper and lay in an even layer on the baking dish.

3. Bake for about 15 minutes, flipping edamame halfway through, and then toss with cheese.

I've seen variations of this dish on the Internet where the cheese is baked with the edamame. I like it tossed on after to make both flavours stand out, but I'm willing to do another taste test to be sure I know what I like best!
Posted by Sarah Reynolds at 06:45