Not all dinners need to be prepared in advance to avoid utter exhaustion. Some dinners can be whipped up in a flash and thoroughly enjoyed.

This dinner is one of those dinners and I have to say that it may be simple, but it’s also extremely satisfying. It’s creamy and good for you, all at the same time. You’d never know that I used skim milk and no cream!

Just don’t tell your friends that it only took one pot and 20 minutes to make, because they’ll all want the recipe and then the secret will be out. 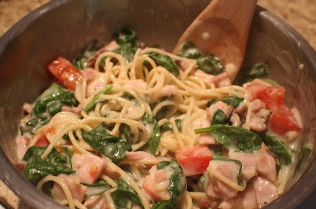 1. Boil water and cook pasta to desired doneness. I like mine el dente, but you might prefer more well done.

2. Drain water and empty pasta into a large serving bowl. Add tomato, ham, and spinach and toss to combine.

3. Add butter to the pot that the pasta was cooked in and cook at medium heat until the butter is melted. Add flour and stir to combine. Gradually add milk and bring sauce to a boil. Stir in Honey Mustard Sauce and season to taste with salt and pepper.

4. Pour sauce over the pasta, ham, and veggies. Toss to combine. And enjoy.

The hot sauce will warm the ham and tomatoes so you don’t have to cook them at all. The spinach will wilt with the warmth of the sauce too and since all you want is for the spinach to wilt, you’re all set!
Posted by Sarah Reynolds at 07:17