Quick as a Bun

Everyone knows that the Easter Bunny is very quick. He runs around and delivers chocolate to all the little boys and girls of the world, all in one night.

And he doesn’t just place one basket of treats on the floor of each home either. Instead, he hides chocolates all over everyone’s homes. And I think that this year the Easter Bunny deserves a break.

At least a break from cooking something time intensive.

Today’s recipe is barely a recipe, but it is delicious and suits Easter perfectly.

So enjoy your egg hunts and don’t worry about what you’re going to make for dinner for the holiday because this recipe is as quick as a bun. 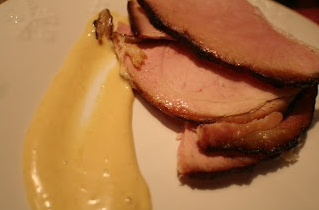 2. Combine ¼ cup of the honey and all of the marmalade in a small pot on the stove at medium heat. Stir until the mixture melts and is well combined. Remove from the heat.

3. Spoon half of the marmalade mixture over the ham and cover it with foil. Bake ham for about 13 minutes per pound.

4. When ham is cooking for it’s last 20 minutes, remove foil and spoon the remaining half of the marmalade mixture over top. Put ham back in the oven and continue to cook for the last 20 minutes without the foil.

5. While ham is cooking, combine the mayonnaise, mustard, and remaining ¼ cup of honey in small bowl. This is a great quick sauce to dip your ham in.

It also works well as a sandwich sauce for leftovers (or, as you’ll see later this week, a delicious flavour- helper for a pasta sauce!)

6. When the ham is finished cooking, sliced into it and serve with a smear of sauce. Enjoy!

Note: Because this sauce has so many uses, you might want to double or triple the recipe, especially if you have a big ham!

Extra note: Did you like my sauce smear? It made me feel very chefy!
Posted by Sarah Reynolds at 06:53