The New Toast and Jam

I love waking up and enjoying a piece of toast smothered in jam with endless cups of tea in the morning. I laze around in pajamas and watch tv shows I missed during the week and couldn't be happier.

So when I figured out who to incorporate toast into a dessert, I really thought I had created a winning recipe. Obviously not everyone agreed with that this recipe was a winner, because I didn't get into the finals of the recipe contest I entered it into, but I sure think it deserves a taste or two! 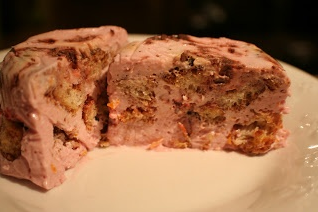 6 slices of bread
1/4 cup of butter for buttering the bread, you may not need all of the butter
1 1/2 tablespoons of cinnamon and sugar + a little extra cinnamon for a garnish
1/4 cup of cream cheese
1/4 cup of ricotta cheese
1/3 cup of frozen raspberries
1/3 cup of raspberry yogurt
Zest from one orange
2 1/2 teaspoons of gelatin (one package)
2 tablespoons cool water
2 tablespoons boiling water

1. Preheat oven to 375 degrees. Butter both sides of bread and cut each slice into bite sized cubes. Toss in a bowl with cinnamon and sugar. Place in a cookie sheet and bake for about 2 minutes on each side or until bread is crispy like croutons.

3. Combine gelatin in cool water. When mixture is dissolved, add boiling water. Stir to combine and add to the food processor. Pulse to combine.

This dessert is very similar to the tiramisu I made for my birthday, which did you like better?
Posted by Sarah Reynolds at 18:03