The Best of Bread

I enter a lot of recipe contests. Sometimes I lose, sometimes I make it into the finals, and sometimes I win. Honestly, most of the time I lose...

Last month I entered quite a few recipes into contests about bread and not one of the recipes I entered made it into the finals. That's ok, though, because you while I didn't win anything, I created a lot of yummy recipes that I wouldn't have thought of otherwise!

This week (and probably next week too) I'll be sharing all of my newest recipes I created when racking my brain to come up with entries for this last round of contests. Who knows, maybe you'll think one of them is a winner!

Here's the first of the bunch, Bread and Butter Fish - the new crispy "skinned" fish! 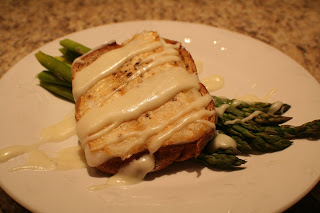 4 square fillets of basa (or other firm white fish), fresh or defrosted4 teaspoons of oregano, finely chopped4 slices of bread Pinch of salt and pepper2 tablespoons of butter to butter bread with (you may not need it all)
2 tablespoons butter2 tablespoons flour2/3 cup of milk2 teaspoons Dijon mustard2 teaspoons of fresh lemon juice1 pinch of salt and pepper1 bunch of asparagus, ends trimmed and washed
1. Start by preparing your fish. Roll the pieces of bread thin with a rolling pin and butter both sides of the bread. Top one side with a teaspoon of oregano and a little salt and pepper. Then place a fillet of fish on top of each slice. Top the fish with another small pinch of salt and pepper. 2. Place each of the pieces of fish, bread side down, in a non-stick frying pan on medium low heat. Crisp bread to a golden brown, about 2-4 minutes, before flipping to finish cooking fish side down, about another 5-7 minutes or until fish is opaque and flakey. (Cooking time depends on the thickness of your fish fillets.)3. While fish is cooking, steam the bunch of asparagus and make the sauce. Melt the 2 tablespoons of butter in a small sauce pan and stir in the flour when the butter has melted. Gradually whisk in the milk and bring the sauce to a boil, stirring or whisking constantly. When the sauce reaches a boil, add the mustard and lemon juice and stir to combine. Season to taste with salt and pepper. Remove the sauce from the heat and set aside. 4. Place a bed of asparagus on four plates and top each bed with a fillet of crispy "skinned" fish. Drizzle sauce over top of both the fish and asparagus and enjoy.
Posted by Sarah Reynolds at 09:48