Getting a Wee Bit English 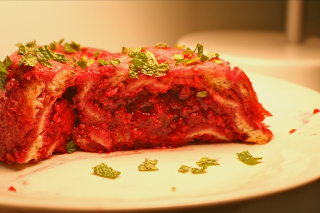 Directions:
1. Combine sugar and water in a small pot on the stove at medium high heat. Stir the mixture and allow the sugar to melt. 2. Once the sugar is melted, add the frozen raspberries and continue to cook until they are defrosted and begin to break down into a sauce. With a slotted spoon, scoop out the solid berries from the juice. Set aside both the juice and the solids for later. This will be the filling and the sauce for your Raspberry and Mint Summer Puddings.3. Line four 1/2 cup ramekins with plastic wrap so that you can easily remove your desserts. 4. Cut four of the slices of bread in half even rectangles. Cut the remaining two slices of bread into four even squares. Flatten all of the bread with a rolling pin. The halves of bread will go along the edges of the ramekins and the quarters of bread will form the top and bottoms of each of the Raspberry and Mint Summer Puddings. 5. Dip each piece bread into the raspberry juice mixture (allow both sides of the bread to get dipped), and press it into the ramekins. Start with a quarter of a piece of bread for each of the bottoms of the ramekins, then squish the halves of bread along the sides of the ramekins. You will have four quarters of bread left for the tops at this point. 6. Evenly divide the raspberry solid mixture into each of the ramekins and the dip the remaining four quarters of bread into any remaining raspberry juice. Place the quarters of bread on top of each of the ramekins. 8. Squish down the Raspberry and Mint Summer Puddings in the ramekins with heavy cans or additional ramekins filled with dried beans and place them in the fridge for at least an hour. 9. When you are ready to serve the dessert, run a butter knife along the edge of each of the ramekins and empty the puddings onto plates. Remove the plastic wrap and sprinkle fresh mint on top.
Posted by Sarah Reynolds at 08:39