Cause I eat my spinach...

You know you love Popeye. He's strong, gets the girl, and it's all due to spinach.

So I think you need a spinach filled delight that will make you just like Popeye.

At least in sense that you'll be eating a lot of spinach! 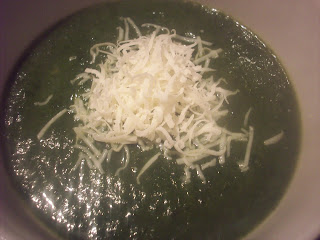 1. In a large soup pot, cook the onion, garlic, carrot, and celery with the Olive Oyl. Cook until the onion begins to sweat and the carrots begin to soften slightly, about 5 minutes.

2. Add the chicken stock and potato and cook until the potato is cooked, about 15 -20 minutes.

3. Add the frozen spinach and continue to cook until the spinach defrosts and cooks, about 5-10 minutes.

4. Puree with an immersion blender and season to taste with salt and pepper.

5. Garnish with a healthy dose of Parmesan cheese, because Olive Oyl should have been named Parmesan. It just goes so well with spinach.
Posted by Sarah Reynolds at 11:31