First off, don't worry because this salad doesn't actually contain straw or hay. I just am borrowing the term from a pasta dish that contains long strips of regular and spinach pasta because both the pasta dish and my salad have long strips of bicolored edibles that look like straw and hay.

Secondly, if you've read Smitten Kitchen, you might have seen something that looks a wee bit like this salad before. However, I've made my version entirely different by taking out the original yummy salad dressing, adding in a new fabulous Asian Pineapple salad dressing instead, and changing a few other bits as well. I can not put into words how delicious this salad dressing is other to simply yell out the word YUM!

Ok, I'm getting hungry. Let's not waste another moment, read on for the recipe! 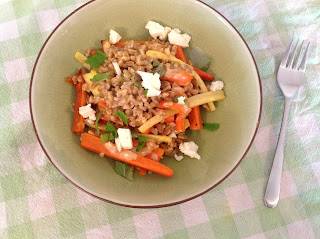 1. Preheat oven to 400 degrees. Toss carrots and parsnips in the oil, salt and pepper and roast for about 20 minutes or until cooked.

2. While veggies are cooking, prepare your dressing. Cook pineapple juice on medium heat in a medium pot for about 10 minutes or until it's reduced down to about a third and quite syrupy. Stir in mayonnaise, ginger, soy, lime juice, and sesame oil. Let cool.

3. Toss warm farro with about half of the pineapple dressing and then add in the carrots and parsnips. Toss again.

4. Serve scoops of salad garnished with cheese and fresh herbs. Serve with the remaining pineapple dressing for those who'd like extra on their salads.


Next time I'm going to try this salad with a mixture of golden and red beets and the carrots and parsnips. And I think I'll replace the farro with brown rice and the goat cheese for a few toasted sesame seeds. I wonder what version will be better!
Posted by Sarah Reynolds at 06:43