I think that my Christmas brussel sprout dish is so reminiscent of confetti that it could be served on New Year's Eve. It's just that pretty with little strips of sprouts fluttering all over your plate, just waiting to be gobbled up.

I loved the lightness brought on by slicing my sprouts thinly, I think it was a great change in pace for one of my favourite veggies. But Luke actually preferred having a big chunk of brussel sprout to stick his fork in, he missed the brussel sprout texture and flavour. For these reasons I think that this dish could be especially good to serve to non-brussel sprout lovers, plus there's bacon in them. Who doesn't like bacon? 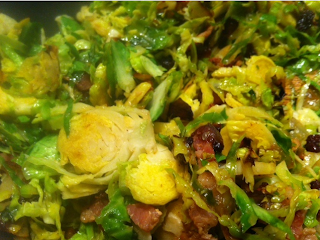 1. Add bacon and onion to a frying pan and cook on medium heat until bacon is crispy and onion is soft and caramelized, about 6-10 minutes. No need for oil as the bacon fat will provide enough fat.

2. While the bacon and onion are cooking, prepare your sprouts. You could cut each little sprout by hand, but pushing them through the feeding tube of a food processor fitted with the slicing attachment makes things much faster. Just place a few sprouts in the feeding tube, pulse, and repeat until all the sprouts are made into pretty little slices of confetti.

4. Add the raisins and worcestershire sauce and toss to combine.

I'm going to take a few detours with some appy's for New Year's Eve and yummy seafood dishes to celebrate 2013, but then I'll be back to share my Roasted Beet Salad recipe. So stay tuned, I know you won't want to miss it!
Posted by Sarah Reynolds at 07:07