"Keep calm and carry on" is a beautiful British saying.

Originally the saying was printed on posters displayed throughout England in World War 2 to be used for public safety and to strengthen morale, but today the saying has become commercialized and used in many different ways.

When I hear the words "keep calm and carry on" I think of people enjoying a cuppa tea, forgetting their worries, and relaxing. And when I found Anna Olson's recipe for Earl Grey Chiffon Cake with Maple Meringue, I could see myself embracing the saying before I took a single bite.

I made a few changes to Anna's original recipe because I needed to make it my own, but I know you'll still love it. 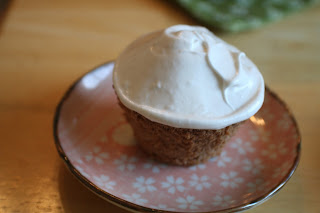 2  Earl Grey tea bags¾ cup  boiling water8  egg whites at room temperature2 ¼ cups flour1 ½ cups sugar2 ½ tsp  baking powder¼ tsp  salt½ cup  butter or margarine 5  egg yolks1 tsp  vanilla extract1 tsp  finely grated lemon zest1/2 cup  dark chocolate, chopped and melted
Maple Meringue:2  egg whites at room temperature2 Tbsp  sugar¾ cup maple syrup
1. Preheat the oven to 325 degrees.
2.  Steep the tea bags in the boiling water, until the water cools to room temperature.  Remove the bags and set aside.
3. Whip the whites until foamy, then add ¼ cup of the sugar and continue whipping until the whites hold a medium peak.  Set aside.
4. Combine the flour, the remaining 1 ¼ cups of the sugar, baking powder, and salt in a large bowl and stir together.  Add the cooled tea, butter or margarine, egg yolks, vanilla and lemon zest.  Beat this mixture until it is thick, about 4 minutes.  Add the melted chocolate and stir, then fold in the whipped egg whites.
5. Bake the cake in mini muffin tins for about 12 minutes or in regular muffin tins for about 20-25 minutes or until the top of the cake springs back when gently pressed. Remove the cakes from the tins and let cool on wire racks.
6. Then make the maple meringue, beat the egg whites until foamy, then add the sugar and whip the whites just to a soft peak.  Bring the maple syrup to a boil and cook uncovered and without stirring until it reaches a temperature of 242 degrees on a candy thermometer.  If you don't have a candy thermometer, drop a bit of the hot syrup into a glass of water, if it stays in a small ball, it's ready. If it dissolves in the water, cook it a little longer.
7. While beating the egg whites on medium speed, carefully pour in the maple syrup and continue beating until the mixture has cooled but is not quite room temperature, about 3 minutes.  Stir in vanilla.
8. Use a spatula to spread the meringue over the tops of each of the cupcakes. Enjoy with tea!

If you like this recipe, look for Anna Olson's Back to Backing to try more of her recipes!
Posted by Sarah Reynolds at 07:23