I Am Wonton Some Wonton Noodle Soup

Luke kind of skimped out on his last trip to the kitchen because instead of making all the wontons for his wonton noodle soup, he taught me to fold them.

I guess that was ok... But I love when someone else cooks for me....

Hopefully, next time, he'll remember that little tid bit about me. :)

Now for the bizarre. Because as if me cooking and Luke studying wasn't bizarre enough.

I'm sure you've all seen pictures of the English signs in China that are thought to mean one thing but actually are just not right at all. If not, just google Engrish and you'll find yourself a laugh with weird and often unintentionally suggestive signs, clothes, and more.

In addition to these crazy signs, some translated words just don't make sense to me either.

For example, when the word wonton is translated into English, it means swallowing a cloud.

I can see how that is sort of a pretty picture but also it sounds a little intimidating.  Clouds are big and my mouth is small.

Not only is the size of that comparison intimidating, but wontons also don't really look, feel, or taste like clouds to me. 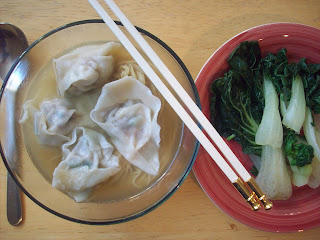 So no cotton candy... Well wontons are white when they're steamed or boiled in a wonton noodle soup. And they do float on the service of the broth. And I guess, if I stretched my imagination, the folding of the wonton wrappers sort of looks fluffy like a cloud...

Alright then, I guess I've convinced myself that since there doesn't seem to be cotton candy in China, wontons can be thought of as clouds.

But I still can't get behind the thought of swallowing a cloud. That's still scary.

If you want to try swallowing a cloud or if you want to enjoy a super tasty soup (without MSG I might add), try this yummy recipe.

1. Start by mixing up the first eight ingredients in a large bowl.

2. Next lay out a line of wonton wrappers flat on your counter.

3. Spoon a small lump of the pork and shrimp mixture in the middle of each wonton wrapper.

4. Dip your finger in a bowl of water and run your finger along two of the edges of the wonton wrapper so that when you fold it over into a triangle, it will stick together well.

Just stick it really tight because the last thing you want is for your wontons to explode when you're cooking them.

What would that be? Swallowing a thunder storm?

5. Next comes the tricky fold. To make them into true wontons, you want them to resemble little Chinese money purses. I had a hard time catching on, so most of my wontons looked more like tortellini, but they still tasted great!

What came naturally to me was to pinch the two ends together on top of the ball of pork and shrimp mixture. But that's not what to do.

What you need to do is, bring the two long ends around the back of the meat mixture and pinch them together right underneath.

Really, I think it looks pretty much the same so I'll let you decide how to pinch your wontons together. After all, you're the one that's going to eat it.

6. Now all you have to do is make all the rest of your wontons! These little morsels are a treat, but you do need at least an hour to make a batch up.

7. Next prepare your broth. Mix your chicken stock with a quarter cup fish sauce and star anise. Simmer your broth until you have enough flavour from the star anise and then scoop them out.

8. Boil some water in another pot and cook your wontons. I don't want too many in my pot at a time so I work in batches. It only takes about 5 minutes until the pork is cooked so stay close to the stove.

9. Last but not least, steam your baby bok choy and drizzle it with a touch of sesame oil. Also cook your noodles. Both of these are very quick.

I buy my noodles at a local Asian market and they make them fresh. The noodles take less than a minute to cook.

10. Ladle up some broth, scoop in some noodles, load on some wontons, and serve the baby bok choy on a side plate.

So get what you are wonton and eat. Swallow your clouds, you deserve them!