Did you know that jack-o-lanterns were originally made out of all sorts of vegetables? It's been said that today's North American jack-o-lanterns could have been derived from how the Irish carved lanterns out of beets, turnips, and other veggies to guide evil spirits away on All Hallow's Eve.

I'd like to say that this is why I made these Jack-O-Peppers for dinner tonight, but I actually just saw a few fun versions on good old Pinterest and had to make up a few myself. Who knew they'd be so easy and fun?! 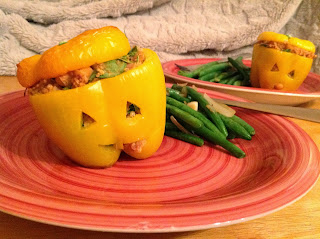 4 peppers, orange or yellow would be best
1/2 cup of dry quinoa, cooked as directed
1 can of chick peas, drained and rinsed
1/2 cup of re-fried beans
3 cups of spinach, lightly steamed until limp
Red pepper flakes, salt, and pepper to taste

2. Use a small knife to cut off the tops of the peppers and to carve faces into them. I recommend simple shapes like triangles unless you are more skilled than me.

4. Spoon quinoa mixture into the peppers and top them with their lids. Balance them in baking dish and bake until the peppers are soft. Enjoy!

Happy Halloween everyone! I hope you all get more treats than tricks tonight!
Posted by Sarah Reynolds at 06:32