As I am patiently waiting for the audition dates to be released for the third season of Recipe to Riches, I am getting busy with taste testing some past season's winning recipes. I'm not making everything exactly as shown, but I am keeping the recipes similar so I can learn exactly what the judges are looking for.

Today's recipe is based on Robert Luft's winning Pulled Pork. I didn't use much of the dry rub from the original recipe, I used my slow cooker, and because I love cherry cola, I added my own twist to incorporate cherries. Hopefully after all my taste testing is done, I will have come up with a winning idea of my own for when the audition dates are released! 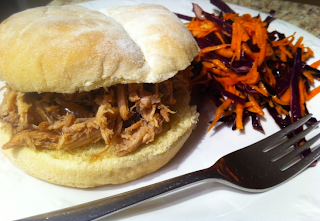 1. Rub pork with paprika, brown sugar, dry mustard, salt and pepper. Add pork and onion to a slow cooker and cook on low until meat is tender, about 8 - 10 hours.

2. Let pork cool and then shred. Chop onion and mix into pork.

3. While pork is cooling, make the sauce. Combine ketchup, vinegar, and cola in a saucepan. Bring mixture to a boil and then reduce to a simmer. Cook uncovered until sauce reduces to about 1 1/2 cups, about 25 minutes.

4. Toss sauce with pork and generously top pork on the bottom of each bun. Spread the top bun with sour cherry jam and sandwich together.

5. Serve with coleslaw and enjoy!

I think sour cherry jam was a great audition to this sammie. Yum!
Posted by Sarah Reynolds at 06:46