I grew up on Georgian Bay in Collingwood, ON and anyone who had visited or lived there knows that saying that there are a lot of seagulls on Georgian Bay is an understatement. I don't think you could even walk down the beach, let alone eat a picnic lunch, without being stalked by a pack of those birds.

Because I'm so familiar with seagulls, and because I'm a really hilarious person (ok... corny), my favourite joke is all about those birds. It's something that Luke and I joke about every single time we see a seagull.

Why do seagulls live by the sea? Because they'd be called bay gulls if they lived by the bay!

Alright, maybe it's not very funny. But we like it! And something else we like is bay scallops, read on for a yummy new recipe starring them!

You didn't think I shared my joke because I'd made a recipe about how to cook a bay gull did you! 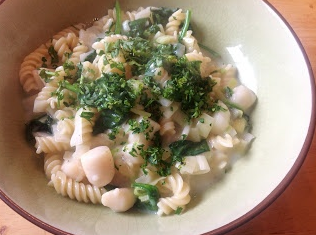 1. In a large frying pan, melt 1 tablespoon butter and fry scallops until browned and cooked through. Remove from the pan and reserve,

2. Next add the remaining butter and leeks. Cook until leeks soften, about 3 minutes. Add flour and stir to coat leeks.

3. Gradually add milk and bring to a boil to allow sauce to thicken. Season to taste with salt and pepper.

4. Add spinach and cook until it wilts. Add scallops and pasta and toss to combine.

5. Serve and top bowls with parsley. Enjoy!
Posted by Sarah Reynolds at 07:03