A Slice of Torture

Waiting for Santa to arrive is a little bit like torture, but I am talking about what I had for dinner tonight. What I have every single Christmas Eve is Torture.

Maybe I should start another way because it's sounding almost like I've become the Grinch...

Tourtiere is a traditional Christmas Eve meat pie that originated in Quebec. The name is derived from the now extinct Passenger Pigeon or tourte in French, what used be commonly used in the pie.

If I had been eating pigeon, I might have still thought my dinner was torture, but I make mine with ground pork. When I was child though, none of my siblings or I liked our pork pie and we called it Torture.

The name stuck and so we still call it Torture. I didn't think I'd ever make it myself, but when my mom broke her back a few years ago I made my first one.

I wasn't a great cook and I had no clue how to make our special meal, so I looked up a recipe and threw in things I thought might taste good. The outcome was great and now I am the official Torture maker. 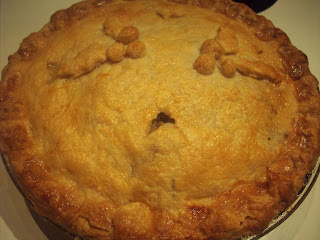 1. In a large pan on the stove, sweat the onion in the olive oil.

2. Add the pork and continue to cook until it begins to brown.

3. Add the spices, apple sauce, potato, and some of the reserved cooking liquid from the potato. Cook until the liquid reduces and the meat mixture sticks together well.

4. Mix in the herbs and season with salt and pepper.

5. Let the pork mixture completely cool before putting it into the pastry shell so the pastry does not melt.

6. Cut out a few festive shapes with a cookie cutter to decorate the pie with if there is any remaining pastry and brush on a light egg wash for a golden glow after baking.

7. Bake at 375 degrees for about one hour or until the top and bottom of the pastry have a golden tinge to them.

8. Let the pie cool slightly before slicing into it and serve with a chutney. 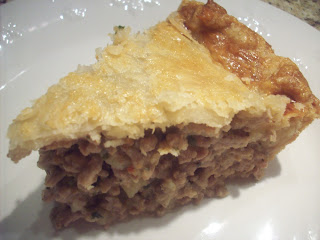 I like to try and make my Torture early and freeze it unbaked.  Then I just toss the frozen pie into the oven and cook it from frozen. It takes a little longer to bake, but the relaxing I got to do this afternoon was worth it!
Posted by Sarah Reynolds at 19:47