I was thinking about how I haven't shown anything Luke has made during one of his ventures to the kitchen in awhile. And then I really thought about why I haven't...

It's because he hasn't made anything in quite some time!

So instead of pushing Luke into making something new, I have decided to show one of his favourite side dishes.

It's one of my favourite foods, a potato. But it's done in a way that almost tastes like a chip, making it better than a normal spud! Just be sure to cook them long enough, there's not much worse than raw potato! 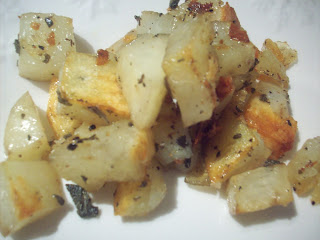 4 large potatoes (these potatoes shrink up and no matter how much you make, there are never any leftovers)
1/4 cup or so of olive oil
1 tablespoon dried sage
1 large pinch of salt and pepper

2. Peel and dice your potatoes into equal sized cubes so that they'll cook evenly.

4. Bake for about 30 minutes and then flip the potatoes so the other side can crisp up.

5. Bake for another 15-30 minutes or until the other side of the potatoes are crisped.

6. Enjoy with friends. But remember they'll go fast, so get enough on your plate before the hungriest people can dig in for seconds!
Posted by Sarah Reynolds at 17:53

Email ThisBlogThis!Share to TwitterShare to FacebookShare to Pinterest
Labels: herbs, potato, side dish