There are so many lists of "super foods" that I don't know what to believe anymore. But if I had to name my own top ten list of super foods, I know that tomatoes would definitely be on it.

Tomatoes are full of antioxidants and that means that have a ton of health benefits. They have anti-cancer properties, provide cardiovascular support, support bone health, and are an excellent source of Vitamin C. Plus, tomatoes are a great addition to many recipes because they can add both a sweetness or an acidity to your cooking.

Tomatoes self seed at my cottage and spread like rabbits all over the gardens. But because they're so tasty and good for you, no one is complaining. In fact, I'm celebrating our wealth of tomatoes with a game. Check out the picture of tomatoes below and try and guess how many little gems are in the bowl. I counted the tomatoes twice myself so I know that my count is accurate! 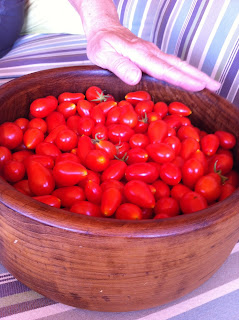 Whoever guesses closest to the real number of tomatoes by the end of the day on September 20, 2012 will get a tomato-lious recipe named after them! 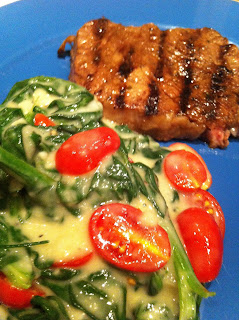 1. In a large frying pan on your stove at medium heat, melt the butter and add the minced garlic. Let the garlic cook about 30-60 seconds or until you can start to smell the garlic cooking.

2. Add in the flour and stir to combine. Then gradually add in the cream and milk, stirring the whole time so you have an even sauce without lumps. Allow the sauce to thicken by cooking it until it begins to boil. Season to taste with salt and pepper.

4. Stir in the halved tomatoes and enjoy.

I think that this dish is great when served with steak and a little extra sauce on the spinach was perfect because I could use my steak to mop it up. For some BBQ tips, see my post from August!