My Recipe is in Country Woman Magazine!

Awhile ago I received a really exciting email from someone at Taste of Home magazine. I was told that they were considering using one of my recipes in a magazine and they wanted to know a little more about me. I quickly answered all of their questions and waited patiently for a response to hear if I made the cut.

After a couple of weeks of waiting patiently, I still hadn't heard back and I pretty much gave up. I knew lots of people had probably received the same email and there was only so much space in the magazine.

But last week something really exciting happened. I found a strange thick envelope in my mailbox and when I opened it up I found out that my recipe was actually chosen and featured in a Christmas edition magazine! The editor referred to me as "staff" and that made these cookies taste even sweeter than they did the first time I made them.

Check out my previous post for Rosemary and Lemon Tree Cookies, visit Country Woman's website, or pick up a copy of Country Woman to see me in print! :) 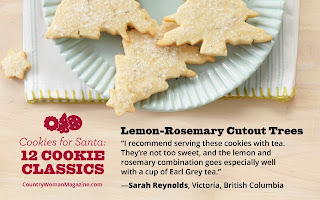 I had to try making these cookies again since seeing my recipe in print. Mine didn't turn out quite as beautiful as they did in the magazine photos, but I know they tasted just as good! 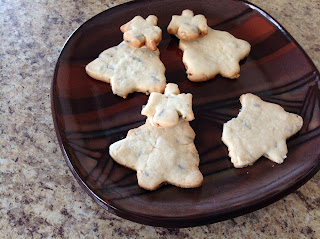